In 2014, Andrew Otis emailed me and said he'd found old shorthand in some judge's notebooks in Kolkata; could I decipher it? I didn't know. I said I'd try. It took seven months but I did it. The first words I deciphered were "Sir Robert Chambers"; the majority of Hyde's hidden comments were about his fellow judges.

In researching the background of the hidden shorthand comments, it became clear that the notebooks, although very difficult to access in Kolkata, were a goldmine of primary historical evidence. During the 1700s, the actions of Parliament and the East India Company were extremely well documented, but little or nothing was known about the life of the colonized. The notebooks contain some of that information and we felt it should be available to scholars. Then, in the preface to Michael J. Franklin's Orientalist Jones, we read that one set of microfilm of the notebooks belonged to Thomas M. Curley. We wrote to him and asked if we could borrow it.

In September 2015, Andrew and I drove to Bridgewater, had lunch with Curley, borrowed the microfilm and undertook this project. As a tenured professor, I became custodian of the eighteen reels of microfilm and, at Rutgers Newark (we don't own a microfilm machine that makes images), I gradually took approximately 22,500 pictures of notebook pages. Andrew, now at the University of Maryland College Park, gradually transcribed the handwritten text.

At the beginning I thought the notebooks could be printed as books. However, this project is so large any books made from it would cost thousands of dollars. Most libraries could not afford them and that would defeat the purpose of the project, which was to make the notebooks accessible to historians and others. Consequently, I decided to post them online.

That decision forced me to relearn html and css and learn javascript, php, sql, Dreamweaver and much more. Fortunately, at NJIT when I couldn't learn something myself, students taught me. It's been an ongoing collaboration, working with different students every semester, as we figure out what has to be done, try to do it and, when it doesn't work, try again. This base website is up now. The chronological browse function, to display each page next to its transcription, is almost working (the month navigation is still off). As time goes on, the students and I will continue to work on it, eventually providing database search capability. When it is all up and working well, hopefully it will provide new historical insights and give a voice to those who have yet to be heard.

NJIT Students Who Have Worked on Hydebooks 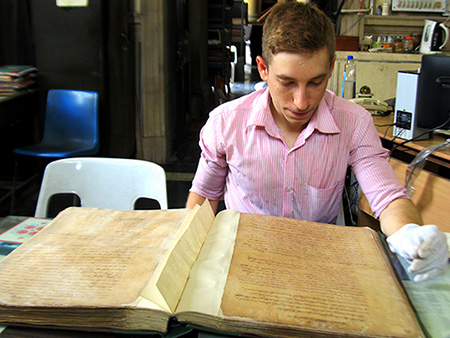 Officially called "The Judicial Notebooks of John Hyde and Sir Robert Chambers, 1774-1798," the notebooks were written in Calcutta (Kolkata) by the judges at court. As can be seen at the picture to the left, the books are large folio volumes. They reside at Victoria Memorial Hall. Two sets of microfilm were made in 1977, one of which is at Victoria Memorial. Since access is limited, the images on this website offer a relatively complete and faithful reproduction for the use of scholars and all who are interested.

For a history of the writing in the notebooks and their travels, see Curley's summary, the Navigating the Notebooks page and other secondary sources on this site.

Approximately two-thirds of the pages have been transcribed and the text appears next to the notebook page image. The remainder will be done gradually. Anyone interested in participating should contact cjohnson@njit.edu.