Navigating the Contents of the Judicial Notebooks

There are approximately 22,500 images, two-thirds with transcriptions. They are organized here chronologically. This website will have a database search function in the future.

Hyde, who wrote all the notebooks between 1777 and 1784, summarized daily court activity unless he was too busy. When Sir Robert Chambers began to write, he recorded proceedings as they occured. So, whereas Hyde looked at an entire day of court business, described broad outlines and included some detail, Chambers recorded details, sometimes overlooking the basics. Both systems have merits. In Hyde, we can see overall court activity. In Chambers, we can see incoming data, minute by minute.

The variation in numbers of pages has other causes as well. When Hyde was alone in court, which happened often before 1785, he did not always have time to record the proceedings. During those times, there are few or no pages. During Sessions (criminal) trials, testimony was transcribed word for word. The judges had to write fast, passing the book back and forth. This is where most pages are generated. It was during one such trial in 1785, Rex vs. John Sturt (for murder), that the entire court wrote together for the first time. 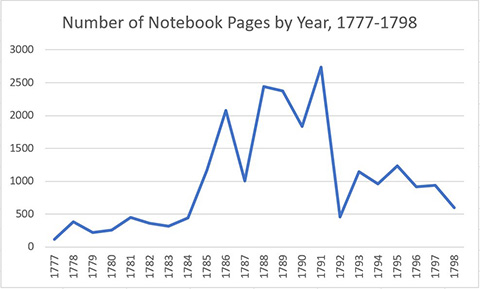 Notebook Pages by Year and Month

Below is a list of every year and month, the number of pages and the (approximate) authors. Term beginnings are January, March, June, and October 22. Vacations are often May and August/September and criminal Sessions begin in June and December. Court business and Sittings (civil trials) are dense, technical and abstruse. Court Sessions (criminal trials) are witness testimony transcribed by the judges and are the most accessible to the reader.

According to Andrew Otis on the Wikipedia site, twenty-four of the notebook volumes were written by Hyde alone, forty-one by Hyde, Chambers and Sir William Jones, and nine written by Chambers after Hyde's death in 1796.