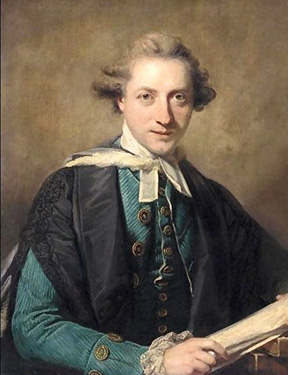 Chambers (1737–1803) traveled to Calcutta with the other judges but did not initially take a strong role in the court or in the writing of the notebooks until Sir Elijah Impey left. He had been appointed second judge with the understanding that he would be the next Chief Justice. When Impey was recalled in 1783, Chambers became acting chief justice, but was not confirmed in the post until 1791.

In 1774, Chambers married Frances Wilton, daughter of the sculptor Joseph Wilton, who was a founder member of the Royal Academy. She survived him, along with four of their seven children.

After his debut as a writer in the notebooks in 1785, Chambers increasingly recorded all of the events in significant detail. The number of pages peaks in 1791, the year he was made Chief Justice, and from that point on he is the most consistent scribe. Trouble followed his ascension, however, since Jones died in 1794 and Hyde in 1796. They were replaced by one of Chambers' least-favorite barristers, Sir Robert Dunkin, and others who sailed to India and sometimes survived. Chambers made no mention in the notebooks of the deaths of Jones or Hyde. His writing is lacks personal observation, but on the last page, he records his retirement with an uncharacteristic embellishment.

Like Hyde, Chambers intended to publish the notebooks but instead they passed to his wife Frances Wilton Chambers, who gave them to Sir Charles Harcourt Chambers, the nephew of Robert Chambers and puisne judge at the Bombay Supreme Court. When Charles Harcourt Chambers died in 1828, the notebooks returned to Frances Wilton Chambers who gave them to Sir William Russell, the Chief Justice of the Supreme Court of Judicature at Fort William in 1832. The notebooks remained in the Supreme Court's library until the creation of the High Court of Calcutta in 1862 when they were transferred to the High Court's Bar Library. In 1974, the notebooks were transferred to Victoria Memorial. In 1978, the notebooks, with the exception of volumes 1-3 (since they were too brittle) were microfilmed by the National Library of India. Two microfilm copies were made, one of which remains in poor condition at the National Library while the other is in the United States. It is from that second set that we made this archive.