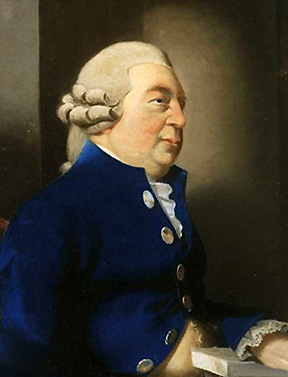 Although Impey (1732-1809) did not contribute to the notebooks, Hyde frequently wote about him and noted his changing opinions. Many were secret comments, hidden in shorthand, about Impey's gradual corruption (see the Firminger excerpt for examples; there are more). From the beginning of the Supreme Court in 1774 until Impey's departure in 1783, Impey was a major figure but his opinions and alliances were inconsistent. He had ambitious beyond the court and eventually accepted a second judiciary appointment under Hastings to oversee the Sadr Dewani Adalat (central civil court), even though such an appointment was expressly forbidden. News of this appointment got back to London and he was recalled. He faced impeachment on multiple counts in 1787 and resigned.